The perfect packages for your summer holiday in Großarl & Hüttschlag.
Summer Packages
Scouting Monuments and the Scouting Guild 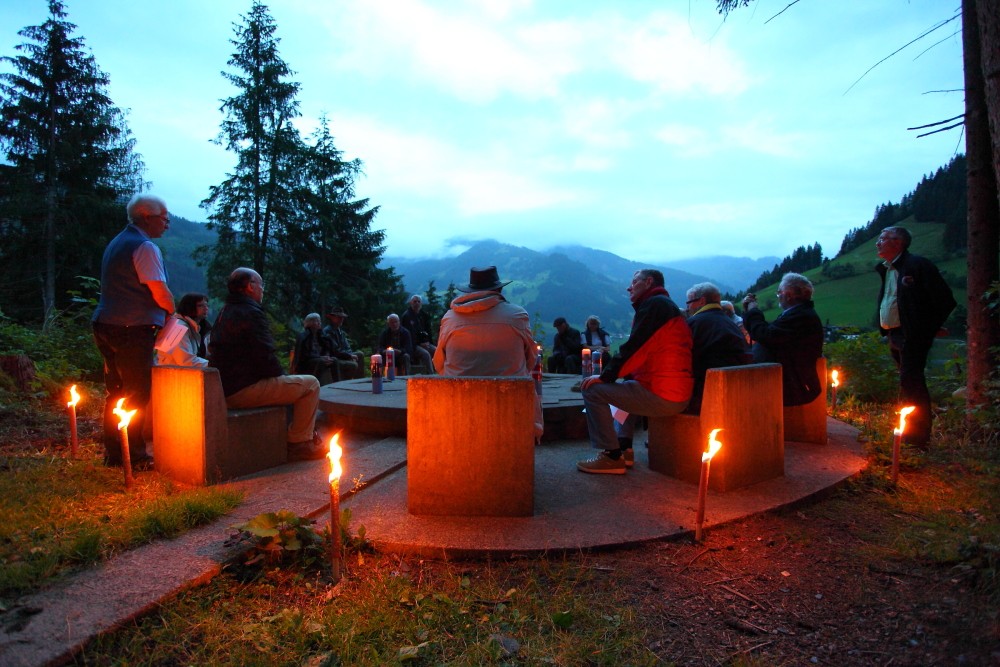 These weeks were focused on societal issues, culture, socializing, sports, nature experiences, discussion forums and various exhibitions. The Scouting Guild has built a number of monuments in Grossarltal. 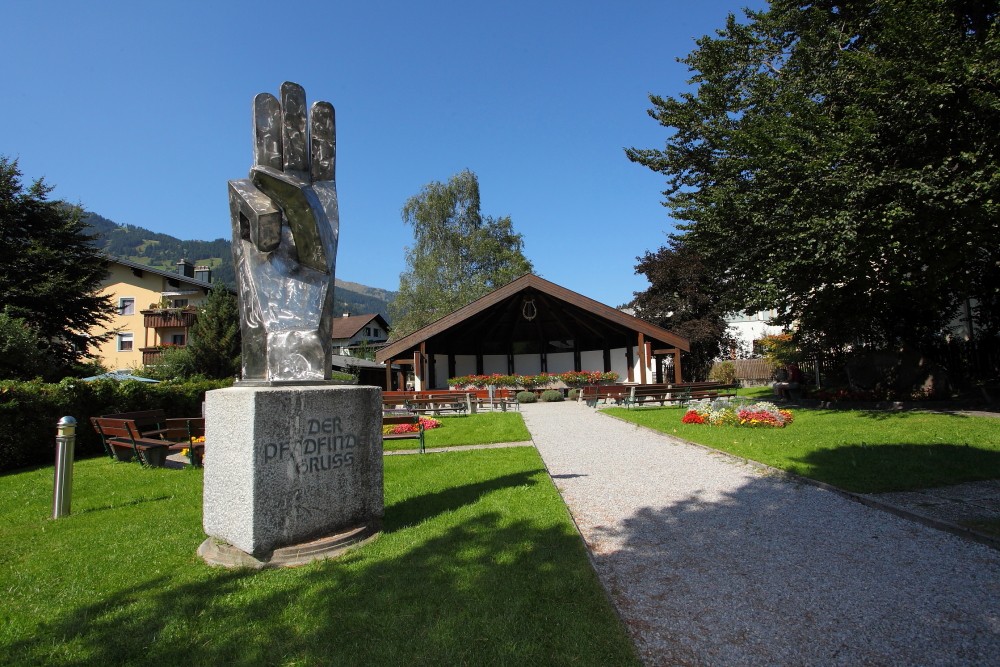 The “Scout Salute” is a true work of art and a symbol of scouting. On 17 January 1998, the statue was officially unveiled at the opening of the 30th Scouting Forum.

A few years later, the statue was moved to the bandstand. The “Scout Salute” is a 2.4 meters-high steel sculpture, designed by Kaj Rugholm from Denmark and made by Josef Doppler from Salzburg. The symbolism of the “Scout Salute” is described on the 1 m-high stone plinth:

“The Scout Salute. The three raised fingers remind us of the three elements of the scout’s oath: 1. Do your duty before God and Country; 2. Help others; 3. Obey the scouting code. The thumb spread across the little finger symbolizes the duty of the strong to help the weak.

” The “Scout Salute” actually acquired additional significance for attendees of the 30th Scouting Forum in Grossarl, since each of the raised fingers also represents one decade of the European Forums held in Grossarl. The palm of the hand, the little finger and the thumb form a circle. This alludes to the global importance of the scouting movement and the Scouting Guild, which chose Grossarl as a center of encounter on 30 different occasions. 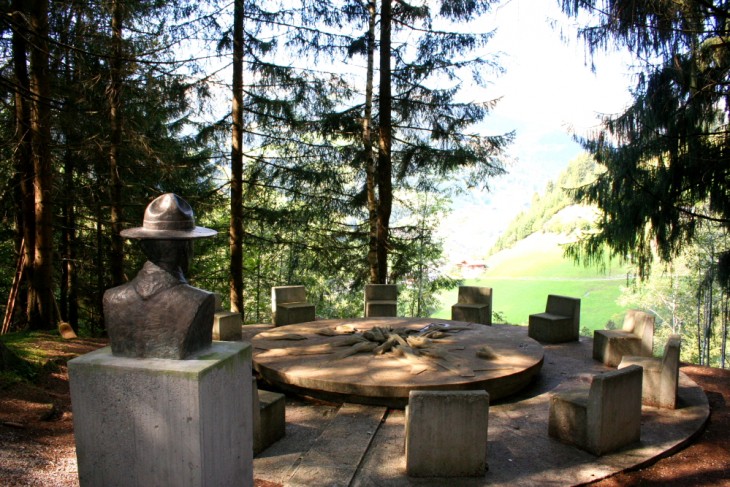 In 1978/79, German sculptor Erich Sauer created the Europe Table. It is a work of unique expressiveness and symbolism. Visitors can actually walk within the sculpture, which is 3.5 meters in diameter. It was cast out of glass-fiber concrete.

On the actual surface of the table, many sculpted hands are intertwined in various gestures and movements, which are in turn bordered by the outline of Europe. The hands of what is a truly meditative site for adult scouts express tolerance, as well as the common bonds between scouts.

The concrete strip which joins the Europe Table to the bronze bust of Lord Baden-Powell, the founder of scouting, represents the connection between tolerance and the fundamental idea of scouting. The bronze bust was created by Salzburg sculptor Helge Heger.

12 stone chairs stand around the Europe Table, referring to the unity of Europe and representing the number of stars on the European flag.

The Europe Table was officially opened on 21 January 1979. It is an artwork that successful integrates concrete with nature. The space surrounding the Europe Table is one of tranquility – where you are sincerely invited to pause and reflect.

The following description is attached to the Europe Table:

“Meditation site of Europe’s adult scouts, symbol of humanity, of the scouting philosophy and indestructible community. Also a reminder of the shared fate and future of the European peoples.”

The Europe Table is about 20 minutes from town on foot. We suggest walking from the town center to the parish church, then continuing along the Schattseitweg (path No. 18) to the Europe Table. 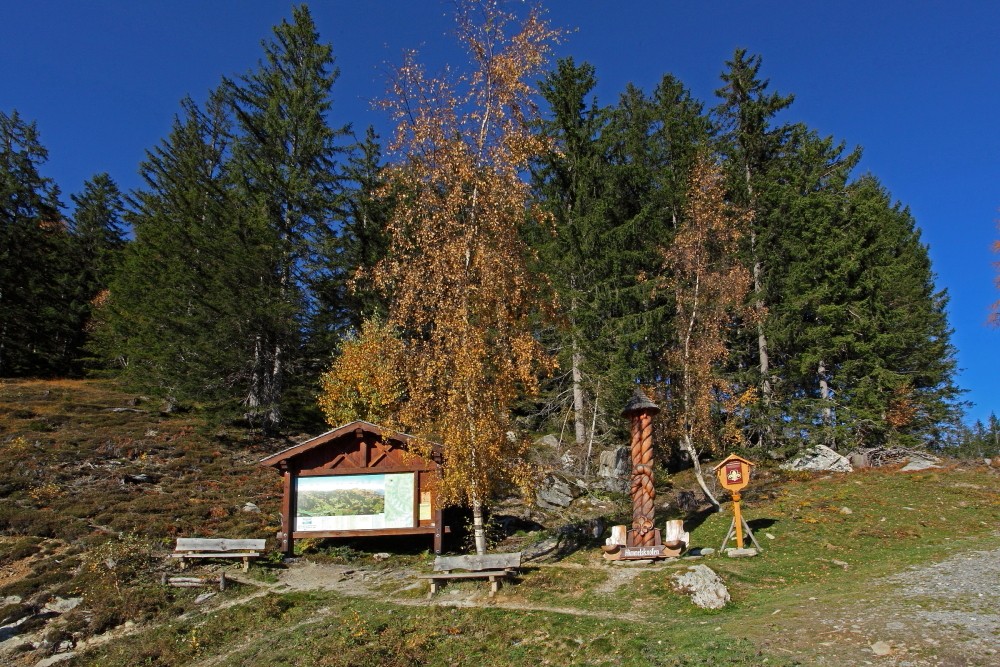 In 1884, the old, first Heaven’s Knot was made from the 5 meters-long trunk of a spruce tree. From the very beginning, it was a symbol of connectedness. The following description stood at the original Heaven’s Knot:

“Erected in veneration of God and as a symbolic joining of Heaven and Earth. An ankh that symbolically unites inseparably, not only thoughts and deeds, but also generations.”

Over the course of time, wind and weather went about their work, resulting in the old Heaven’s Knot ultimately having to be replaced by a new one. The ceremonial unveiling came on 17 January 2000.

The new Heaven’s Knot was designed and created by Grossarl sculptor Albin Kreuzer. He selected a larch tree that had grown in Grossarltal. The Heaven’s Knot was collectively financed by European guild associations and private donations, then transported with the aid of Grossarl locals and friends of the Salzburg guild to its intended location, which, at that time, was a meadow on the Holzlehen Farm. The Heaven’s Knot attests to the goal of a united Europe.

Just as erecting and transporting the Heaven’s Knot proved arduous, so, too, is the pathway which Europe is following.  Thus, the Heaven’s Knot is also intended to symbolize the fact that a goal, despite all difficulties, was indeed attained, and that the goal of a united Europe is likewise achievable.

The view of Grossarltal and of the Europa Table was perfect at the former location. That said, it was not easy to reach, especially in winter. Consequently, the Heaven’s Knot was relocated in 2007 to the car park next to the transmitter station. In 2008, the Heaven’s Knot was presented to the public in a ceremony at its new location during the 40th Scouting Forum in Grossarl. The view of Grossarltal, now as then, is unique, while the Europa Table is also still in view. The only thing that has changes is its accessibility, which was improved significantly. Ever since the Heaven’s Knot has stood next to the car park, countless hikers are able to marvel at it, scouts and not.